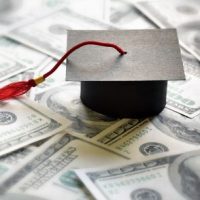 When the U.S. government decided that it would extend loans to its citizens, it thought it was doing a good thing. To encourage loan vendors to issue the loans, the government had to afford it certain protections. These protections are unlike any loan provider in the U.S. No loan provider can prevent a debt from being discharged in bankruptcy with the exception of federally-issued government loans. These loans can never be discharged in bankruptcy unless you become totally disabled.

However, President Biden has pushed the “pause” button on repayment plans ever since they were suspended during the COVID quarantine. This means that loan services have not been receiving payments since 2020. It also means that at any time in the near future, the government can decide to compel the repayment of these loans blindsiding Americans who are already struggling with inflation and living costs.

While student loan forgiveness may not necessarily be on the horizon, bankruptcy protections for borrowers who will never be able to repay those loans could be. Indeed, student loan lenders are one of the few lenders that incur almost no risk when the debt is unpaid. As part of a compromise package, it may end up being that sometime in the future, it will be possible to declare bankruptcy on student loans. Right now, however, you can’t.

While bankruptcy courts are under no compulsion to discharge your student loan debt, that doesn’t mean that they don’t listen to petitions relating to the discharge of student loan debt. Debtors who tell the courts that despite making good faith efforts to repay the loan, they would incur too much financial hardship and would not be able to meet their other financial obligations, can get a full or partial discharge of their loans. In some cases, the court may force the lender to agree to better terms.

The problem for the debtor is that student loan servicers are willing to take payments that only cover a fraction of the interest. So, there may be no situation in which the servicer would require a payment that caused financial hardship. That being said, discharges related to student loans are rare and proving disability is a general requirement.

Historically, bankruptcy courts set a very high bar when it comes to “undue hardship”. Unless you can prove that you’re completely disabled and that your condition is unlikely to improve, then the courts are unlikely to grant a full discharge. If you can prove “undue hardship” then the court is more likely to issue a partial discharge than a full one. If they can avoid a partial discharge, they will simply require the loan servicer to set better terms.

As stated before, however, student loan servicers allow very small repayments allowing insolvent debtors to rehabilitate their loan without making significant progress on repaying it. That makes it nearly impossible to get a full discharge.

If you are buried in debt, bankruptcy may be the best option. Call a Jacksonville bankruptcy attorney today to tell your story and find out if bankruptcy is right for you.